I had the best day sketching with the Barcelona sketchers on Saturday. I'd like to thank everyone for making me feel welcome, speaking English on my behalf, and putting up with my bad Spanish, especially Cesar and Dave. Also, Sagar, Antonio, Saki, Silvie... EVERYONE was so nice!!!

I wanted to join the Barcelona sketchers partially because I've seen their amazing drawings online, but mainly because I've only done small SketchCrawls that I have arranged. Small - well Saturday was anything but small as the SketchCrawl coincided with the 1st urban drawing contest in sketchbooks. (1er Concurso de dibujo urbano en libreta). 274 people participated in the contest plus there were us non-participants. Incredible!!! I have never seen so many people drawing at the same time, not even in college.
The SketchCrawl started at Plaça Catalunya, where Cesar, Dave & I, along with lots of others, headed up to the café at the top of El Corte Inglés. My eye was caught by a yellow & orange tower, so I had to draw it. 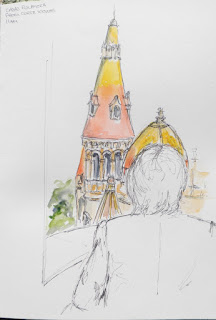 Next it was on to the church of Santa Ana, where I chose to draw the  flower stall. I was going to add colour but liked the lines as they were. 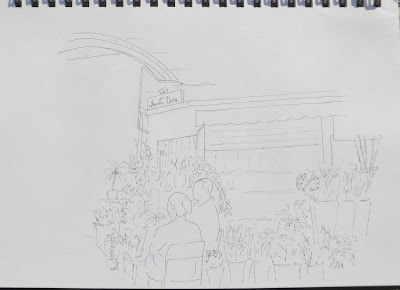 Moving on to Plaza de la Catedral, I had an unsuccessful time due to rain stopping the watercolour I was trying to do, twice, so I gave up and drew some gargoyles instead. 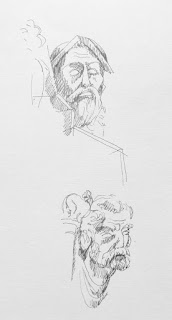 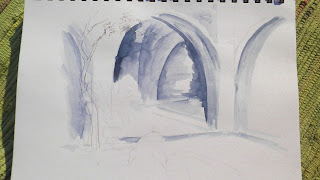 It was suggested that I finish the watercolour by memory, but I think I will just return one afternoon and continue where I left off.
Then, it was finally lunchtime and I was invited to join Cesar & friends. At the restaurant, sketchbooks were shared and drawing continued whilst we waited for our food. 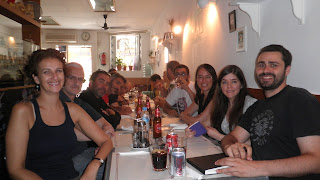 After a scrummy lunch, it was onto Plaza de San Felip Neri, which is where I sketched all the sketchers above. Then on to the last site on the crawl map, Plaza del Pi (top sketch). I was sitting on the floor with some Spanish girls, when we all decided we just couldn't draw any more. I had an invitation for an art exhibition so headed off there.
I had passed invites onto the others, so after contacting them to say it wasn't worth going, I joined them for a drink. Two & a half hours after I stopped sketching, I ended up doing 2 more... it's compulsive if those around you are drawing, honestly. More sketchbooks were shared and materials too. 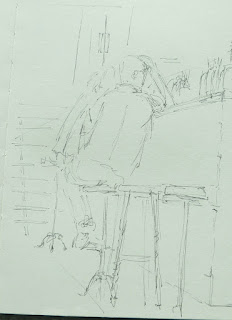 Saturday's SketchCrawl was the longest day I have ever spent sketching, the furthest I have walked on a Crawl, and the most fun with the nicest people. All in all the best day!
Thank you again Barcelona sketchers.

******
If you want to know more about SketchCrawl, please visit the site SketchCrawl.com

The site of the Barcelona sketchers is here.

Please forgive the quality of sketch photos, I haven't located anywhere to scan drawings yet.
Posted by Unknown at 19:53

and this nomad is wandering. 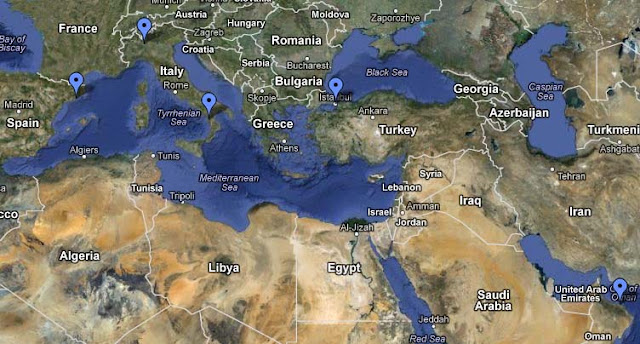 The map shows my key stops, although the majority of the summer will be spent in Barcelona.

I'm not sure how much time or opportunity I will get to post whilst I am away, but please pop by in case I do. (Saturday is WorldWide SketchCrawl #36, so I will definitely be sketching)

Also, I'm not sure if I'll be able to  visit your blogs, so I apologise if I miss anything.

I'm back in Muscat 23rd August.


Have a good summer everyone.
Posted by Unknown at 10:00

Started on the 10th June, I finished the 5th Festival Face on the 29th, so it took about the same amount of time as the 1st one, His Brother's Musar.

The WIP photos are below. I've been using Instagram to record all recent drawings, and thought I'd share them here too.
*****
Photo reference supplied and used with the permission of Waleed Mohammed.
WaleedMohmeedPhotographer
Posted by Unknown at 09:54

I have been remiss with keeping up with Illustration Friday. The weekly challenges are a great way to stretch my illustration skills and show some of my other styles. This week the site was relaunched with a gorgeous new look and the theme Refresh, so I thought it was a good time to start participating again.

I had the idea of this abstracted slept-in bed after a bout of insomnia. I didn't wake up refreshed, but I was inspired to draw the resulting chaos.
Posted by Unknown at 08:28


Due to the time of year, we were a small group who met at Bait Al Zubair museum to sketch on Saturday. I had a phone call from one person saying they'd be late, only thing was that they were 7 days early! I chose this venue as it has amazing artifacts in the main museum as well as an old Omani house. Plenty to occupy us in this hot season when sketching outside is impossible.
We started off in the main exhibition rooms and I decided to draw some jewelery - not the best choice for a warm up subject. The Al Hirz are types of necklaces for carrying the Koran. above

Next up, I attempted an antique coffee pot, which was not overly successful.
I did 2 more sketches in the old house, which I am also not happy with, before returning to the main museum to sketch some more jewelery.
Thank you to Bait Al Zubair and their staff for helping make it a great mornings sketching.