Spring 2012, I read about a Mad Hatter's Tea Party arranged by illustrator Lynn Chapman (Lynn's blog is here). I was so inspired by the drawings the group produced I decided to arrange my own tea party, which I held last weekend. 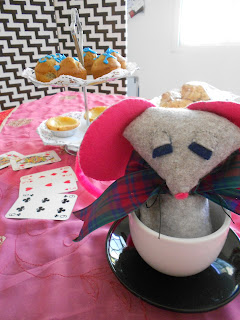 Planning started this January, whilst I was home in UK, and saw me making a dormouse, which inspired us all at the tea, as our drawings below show. 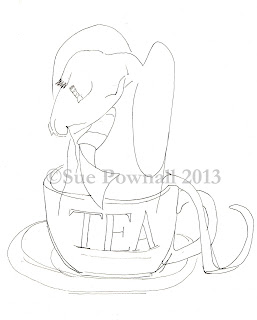 In a UK charity shop, I bought a silver tiered cake stand, which conveniently screwed apart so I could pack it easily. At the tea, I added tarts (custard not jam) and cakes I iced with "eat me". Some macaroons from the Chedi hotel were added later. I attempted to captured them all in the sketch at the top of this post. The other thing I did in the UK was to get material for my Hatter's hat and planned how to make it, with a great suggestion from mum.
In Muscat, I made my hat, paper roses - painting some white ones red, but the scones were bought at a local deli. 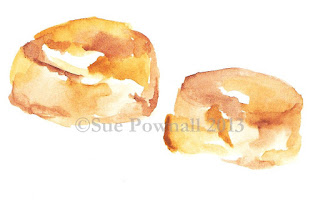 My flat is small so it was a small but select group of us who participated. Unfortunately one lady got lost and never arrived.

I for one had great fun and think the others did too.
Posted by Unknown at 13:28

On 21st November I made the first guide pencil marks on this drawing and it has been lurking ever since.
From starting it, I've ...

finished Festival Face #6, you can see her here,
drawn and donated a drawing for a charity exhibition,
had a commission to do,
arranged & attended 2 sketching events,
had a stall for my art at a winter fair,
produced 2 illustrations for The Story Shack,
and spent 3 weeks on holiday in UK.

I guess that's enough reasons for it to have taken so long.
Posted by Unknown at 18:00

Chinese New Year: the year of the snake

Just for fun, a drawing to celebrate the Chinese New Year, which since Sunday is the year of the snake.

Whilst in the UK I went to 2 more life drawing classes. As with drawing Terry I took charcoal to draw with as I'd had such fun before. In the 2nd class, I also tried using watercolours directly without under-drawing. I think as a side-effect of drawing portaits for my Festival Faces series, with both models I ended up drawing portraits during the long poses. Gaby was so pleased with my drawing of her that she took a photo of it. Below are other drawings of Gaby.
The day before I left UK, I got to draw Rachel and her tattoos again. I drew her before in September 2011 and you can see those drawings here. With the first long pose I drew the charcoal portrait below, which I think is a fair likeness. Then did the rough full body drawing. Can you tell I was pre-occupied with what I had to do before my flight the next morning?
Finally,  I drew another portrait of Rachel as a concerted effort to focus and relax.
*****
Please note: I am switching over to blogging through my site, www.suepownallartist.co.uk/blog-art-of-a-nomad and plan to stop duplicating posts here. May I suggest you adjust your RSS feeds and readers to follow there?
Posted by Unknown at 18:36