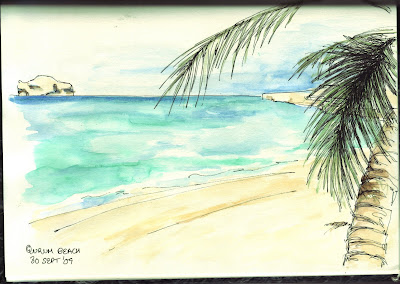 As I wrote at the bottom of my last post, I am currently using 2 sketch books. The first drawing in the larger A5 one, was from Jordan March 2005, and is a pencil drawing done in Jerash. Whilst the A6 was started in Madrid a couple of years ago, September 2007. It is a disgrace that they have been hanging around partly used for so long, but with my renewed passion for drawing I hope it won't be long before they are both complete. In the meantime here are those first sketches. Also, right is a sketch from Acebo, Camino de Santiago, which is page 2 in the small book. Whilst above, is a sketch I did this afternoon on Qurum beach, Muscat. 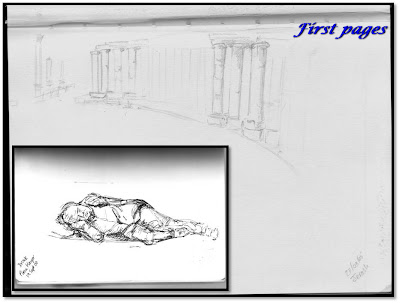 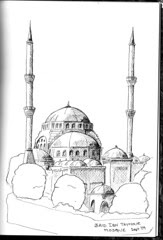 I am not very happy with this sketch, and am posting it in order to get some help.The initial pencil sketch was done in situ, then with the call-for-prayer and lots of people arriving I hurriedly left. I think I have tried too hard to produce a good drawing and it seems both over and under worked. Initially, I planned to do a line drawing only, so I don't think it was helped by my cross hatching later. I recognised I need to practice semicircles.so tried to hide the bad lines. :( 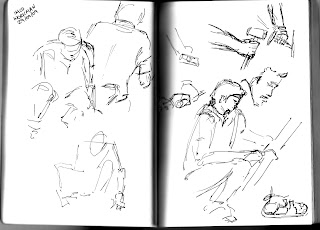 The above sketches were done this afternoon, whilst I was waiting for students to turn up. A workman was outside the room installing new plumbing and I spent about 5 minutes drawing him.

The sketches were done in 2 different sketchbooks, the mosque on A5 and the other in my handbag's A6 sketchbook.
Posted by Unknown at 12:18 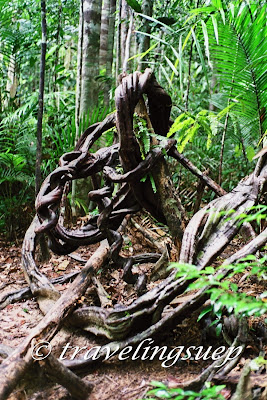 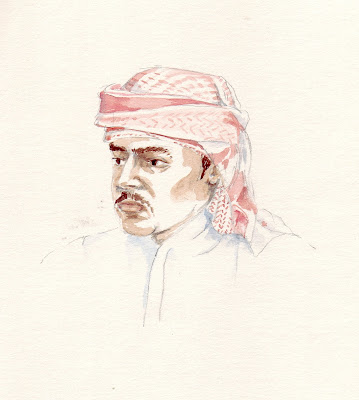 The theme set yesterday by Monday Artday was Sailor. This is a watercolour of Khamis I did this morning. He is a student at the International Maritime College Oman. If he is successful in his studies, he will go to sea in 3 years time. However, despite his serious expression he does not study much preferring to joke around in class.
Posted by Unknown at 08:53 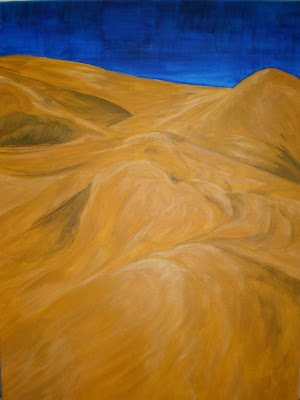 without limits; extremely large or great

The universe is theoretically infinite.

With infinite patience, she explained the complex procedure to us.

(Definition of infinite adjective from the Cambridge Advanced Learner's Dictionary)

The desert counts as an infinite place. I'm not too sure how successful this painting is, so I posted it anyway to get feedback on it. I am still trying to find my style with acrylics; I am trying to push myself to experiment, but I much prefer working in pen & ink

Below are 2 pics showing the first wash, and an intermediate stage. The final pic, shows my paint splattered wall - I think my landlord is NOT going to be happy with me. 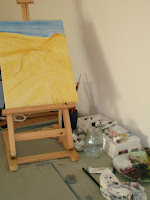 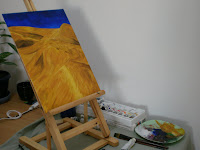 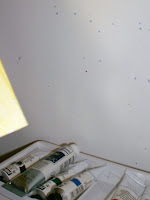 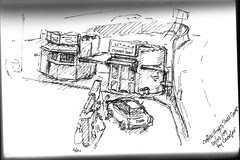 Coffee shops by Carrefour
Originally uploaded by travelingsuep
Inspired by Saturday's SketchCrawl, and having run out of teabags (a crime for a Brit), I headed to Carrefour sketchbook in hand. From an upstairs window I could see this view of the Shell garage, closed coffee shops, it's Ramadan, and the slip road up to the supermarket.
Posted by Unknown at 13:10 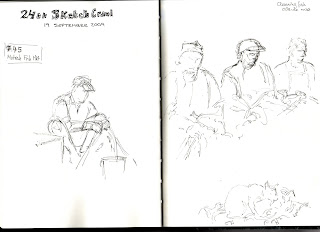 SketchCrawl 24 was difficult for me here in Muscat as we still have high daytime temperatures (today 33c with 75% humidity) and it is still Ramadan so there are no cool coffee shops or restaurants to retreat to. I headed out early to avoid the worst of the heat. Luckily for me, Saturday is normally a working day, but this one is part of the Eid break, so I was able to take part in my first SketchCrawl. 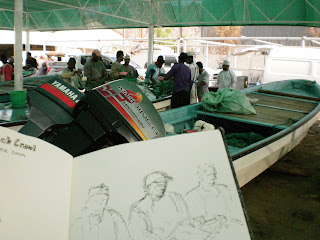 Location 1: Mutrah Fish Market   I have never been here so I thought it would be a good starting point. I made a  few quick sketches of the men removing fish from their nets, and a local cat, who had also managed to remove a fish. Then it was off inside the market itself. I was pleasantly surprised as it did not smell and there were a few other women about, although not many. Feeling intimidated, I took a few photos, and then sat down to draw... but as sweet Omani men kept coming up to talk to me the results were not very satisfactory, and I scurried back outside again. There, I thought I really ought to draw some fish, which I located on the back of a pickup and then I drew some watermelons, also on a pickup. All the sketches can be seen on flickr here. 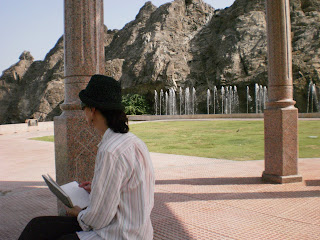 Location 2: Across the harbour  Already feeling very hot and sticky after an hour at the market, I drove across to the otherside of Mutrah. Whilst sitting in the car's AC I furtively swigged a little water, feeling like an alcoholic hiding my drinking, as it is not allowed to drink, eat, or smoke in public during Ramadan. I settled on a bench and tried to decide what to draw (and also took this photo self-portrait at the same time). I decided to paint a heavily laden cargo ship opposite. The painting is unfinished because after I had been working on the picture for about half an hour some tugs came along and took my subject away and out to sea. You can just about see the white of the tug in the photo and my quick sketch of it at the top of my sketchbook. 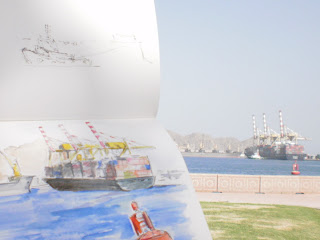 So, after a quick cool off in the car, it was off to my final location, in the middle of Mutrah Corniche. 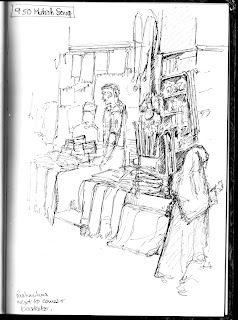 Location 3: Mutrah Souq  Just inside the entrance was a conveniently placed bench, so I sat down and drew what was opposite me. Their were lots of Omanis in the market getting last minute Eid gifts, and only a few tourists. I was lucky to have this Omani lady stop long enough for me to include her in my picture. The two stalls sold different things, which is unusual for the souq. On the left, the man was selling pashminas for the tourists, and traditional Omani dress including dishdashas & kumahs (embroidered hats). Whilst, on the right they were selling traditional canes, baskets, and incense.

After nearly 3 hours, I stopped drawing as I was starting to feel very dehydrated and in need of a shower due to the humidity, and so I finished my first SketchCrawl. Although I really enjoyed myself this morning, hopefully for the next one I will find someone to sketch with.
Posted by Unknown at 11:06 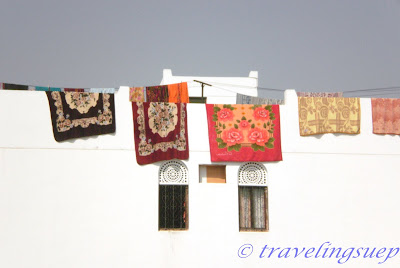 Rugs on the roof seemed pretty upside-down to me, I hope you agree. 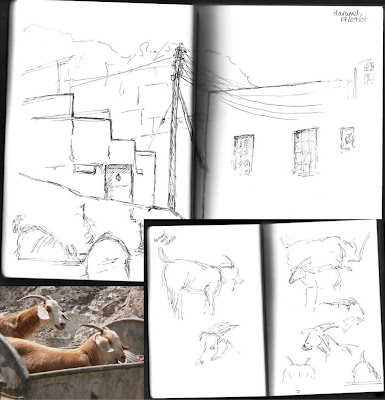 After visiting a friend this morning, I diverted to the village of Haramel. I have driven past the signpost to this village numerous times, but have never turned off before. The village is a cute, typically Omani, little fishing village. Whilst the beautiful scene of the fishing boats, beach and background of mountains was inviting me to draw it, some goats nearby grabbed my attention. After attempting to draw them, I then turned my attention to the street scene beyond the dustbins. I did not spend long on the sketches, as being an environmentalist I disagree with excessive running of a car's a/c, but the temperature was already in the mid-30s C, and I wanted to draw. So I compromised, as I was unable to stand outside, by staying in my car a limited time only. I am participating in the 24th Worldwide SketchCrawl on Saturday; today's sketching has shown me that I will need to start early due to the still high temperatures.
Posted by Unknown at 11:21 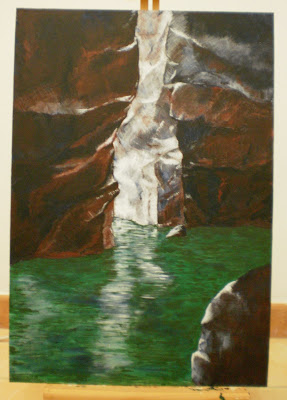 A welcome pool in the Al Hajar Mountains
I couldn't think of anything for this week's theme apart from doormats and greeting dogs. The former I didn't want to draw and the later I don't think I could. Finally, yesterday I thought of this... the welcome sight of water when you are crossing the hot, dry, and dusty Al Hajar Mountains, Oman. I took reference photos in July '08 and this is the first time I have attempted the subject in any medium. The painting is still on the easel as I may still make minor alterations, but I'm posting now as there are only 2 days left on this theme at IF.
Posted by Unknown at 15:42 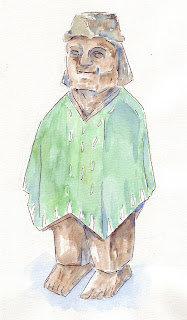 This quick sketch is the result of my insomnia last night combined with the desire to post something to Monday Artday. It was done before work this morning in pen and watercolour. It is not a finished drawing, just a sketch, of my cute Chilean souvenir.
Posted by Unknown at 10:32 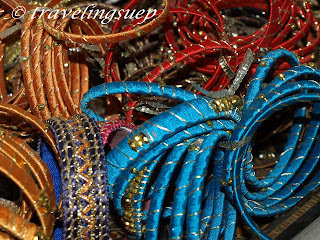 My take on this week's theme of electric - electric blue.
Posted by Unknown at 10:03 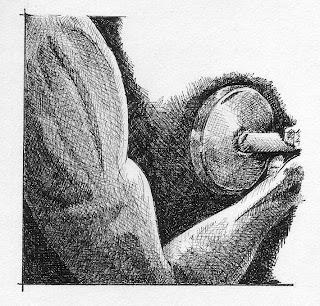 Some people join a gym in order to get fitter, so I've joined a couple of websites to both draw more, and hopefully improve my drawing. Unlike joining a gym, I intend to stick to my minimum twice monthly resolution to draw. Famous last words they may be, but time will tell.

So the first drawing this month is for Illustration Friday's weekly topic - Strong.
Posted by Unknown at 15:06 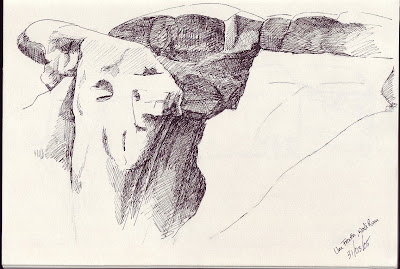 To start, above is a drawing that was sketched in situ in Jordan's Wadi Rum using my favourite medium, pen & ink. Whilst below is an attempt to capture the movement of traditional Omani clothes, using acrylics. The original is now hanging in a friend's house in Muscat, along with the third picture. 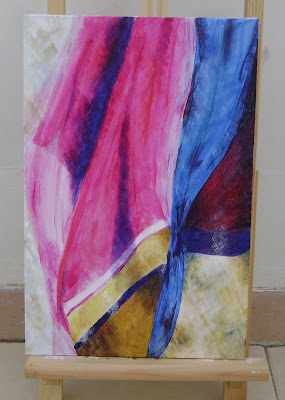 This third picture is another in my favourite pen & ink. It is a drawing inspired by a section of the Camino de Santiago, Spain. 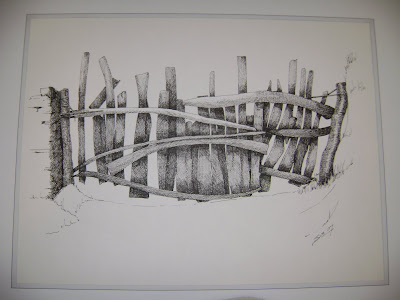 Finally, this is a drawing I have hanging in my own flat of an Omani watchtower in Fanja. 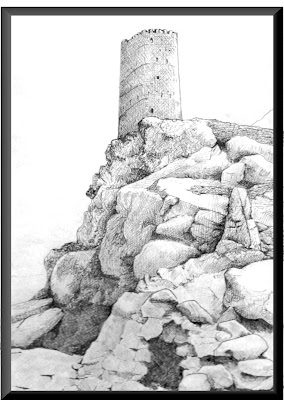