As a person, I think Christmas should not be thought about, advertised, nor shopped for until at least the end of October. However, as an artist the illustrations for Christmas cards need to be started (if not finished) now. One of my personal goals was to "Produce a series of illustrations to be sold as greeting cards" as stated in my Review & Resolutions post.

Consequently, here is the first one, which is available now in my print-on-demand store on Redbubble (www.redbubble.com/people/suepownallartis) and will be available elsewhere soon.

Drawing on the street

It's a funny thing, being an urban sketcher I'm used to drawing in public, out on the streets, but yesterday I was due to give a demonstration of my pen & ink work in front of a local art suppliers and beforehand I was very, very nervous. Whilst I have taught pen and ink, I have never worked up a drawing in front of people, and was very worried about the ugly duckling stage that it would go through.

Luckily, everyone who stopped by was lovely. Some had come deliberately to see me, others by happenstance and we talked about my art, art in general, sketching, equipment, and Oman. Two people had been there, one for work and the other on holiday - small world.

There was only one character who stayed for ages and was being purposely provocative including saying "You could be a brilliant artist, but you won't be". He felt my work was too safe and not experiemental enough. Maybe it isn't very experimental, I may think on that, but as he has never shown his work nor would he give his name, I shall not worry. With the exception of him everyone was very complimentary.
The worry about the ugly duckling stage was needless. I had put down the outline beforehand and expected to reach it at some point in the day. However, I spent so much time chatting to all the lovely people, that in six hours I only completed less than an hour's drawing. You can see the progress below (sorry about the green tinge, it's from the gazebo).

Whilst my sketching mojo has made a small comeback this week, I seem to have lost my words, hence the non-title of this post.

On Monday, I had 20 minutes to have a cuppa before a meeting in Somerset House. I sat on the terrace and had to sketch my view of the London Eye. 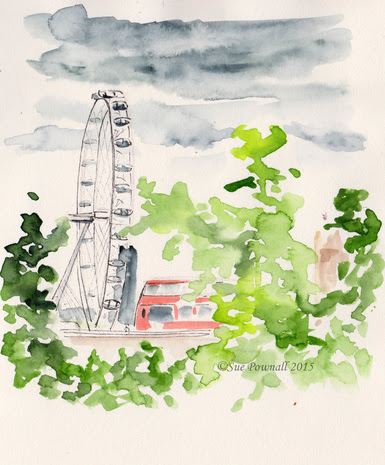 On Wednesday, I had to go to Maldon and with a spare half hour started to sketch an amazing garden-covered barge. I didn't have time to add colour, so I did it at home later. 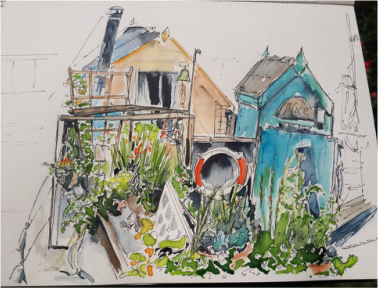 Thursday I was stuck in the hairdresser's for ages, so grabbed my A6 Laloran sketchbook. I'm a bit concerned as I don't recognise that old lady in the mirror.
I sketched myself in the same position in 2010. I remember that I didn't wear my glasses and had to squint at the book.
Then yesterday, I joined the Essex & Suffolk Sketchers at Henny fete, where I visited a local garden, which happened to be serving cream teas. Using a Daler A5 sketchbook, I sketched it to justify eating it despite my ever expanding waistline. 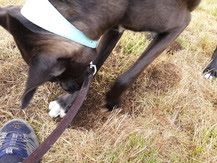 Finally, I did a very quick sketch trying to capture a feeling of the quintessential English fete, whilst my assistant dug herself a hole.

As it was so colourful, I used a rainbow pencil by Lyra in my A5 Daler sketchbook.
So that was my sketching week. Now if I could only think of a title...

Still struggling with a missing drawing mojo, amongst other things, I started #DrawAugust which is a twitter hashtag challenge.

Back in January, for Liz Steel's Sketching Foundation course, I sketched the fence which divides the house from the neighbours. Now, in summer I resketched it as part of a changing story and as a record of my parents' garden. 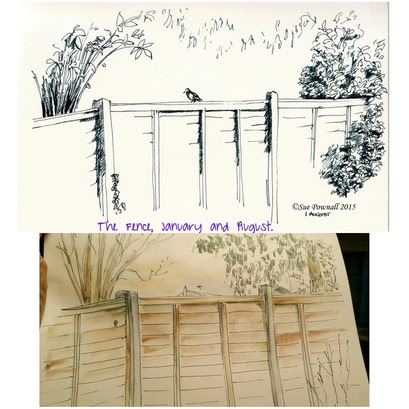 Following that, I did another sketch from the garden. This time the ripening apples on the neighbour's overhanging apple tree. 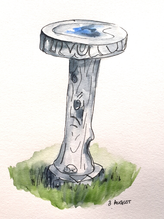 A very quick sketch of the birdbath was done on the 3rd.Whilst today I have sketched Degas sunbathing in it.

I aim to do more garden drawings over the month, which I'll share here. What are you doing this week?
Posted by Unknown at 15:46

On Friday night, I had arranged for the Essex and Suffolk sketchers to have a 3rd DrinkDraw evening. These evenings are proving to be very successful and we had a good turn out again.

We went to the Rose and Crown in Wivenhoe, which has this great quayside beer garden. The above photo shows us hard at work sketching the estuary, boats, pub and more.

I spent most of my time chatting and/or playing with my assistant, who likes the drinkdraw evenings out, than painting. oh well there's always next month.

Here's my one sketch, direct watercolour in an A5 Daler sketchbook.

More talking than sketching occurred last Saturday too. It was the #48th Worldwide Sketchcrawl day, so I arranged to join the Drawing London on Location group at the Geffrye Museum in Hoxton. Unfortunately, my sketching mojo didn't come too. I was ready to sketch on the train but... it was packed as the Norwich train had been offloaded onto the train I caught. I found a seat, got sketchbook and glasses out and... the man next to me proceeded to tell me all about his life as a cruise ship pianist.

Arriving at the museum, it was one of those days that the scale of the building was intimidating and the gardens stunning but... nothing grabbed my attention. I decided a cup of tea was the solution, which it was as I loved the organic lamps and was lucky enough to have the people I was drawing stay as long as I sketched.

After another wander around looking at the exhibits, I chatted to a few other sketchers, then decided to head off to look for my sketching mojo elsewhere.  As my lack of results on Friday show, it hadn't come back by then. Fingers crossed I relocate it this week.
Posted by Unknown at 11:13