Worldwide SketchCrawl was the other Saturday, and I had planned to join the Urban Sketchers London. Unfortunately, snow fell and settled at my parent's village during Friday evening and night. In the morning I ummmed and ahhhh whether to chance the trip to London. Then, the snow started again as I got into the car to drive to the train station, which made up my mind not to go as I was worried I wouldn't get back from the city.

Instead I took my parent's dog for a walk and once home I sketched my wellies, which are badly out of proportion, and his lead. Later I added my wooly hat to the page. Finally, in the afternoon I drew the dog sleeping on the sofa and the bird table.  Also, I started a rooftop view from my bedroom, but didn't complete it until Monday afternoon.
Posted by Unknown at 11:04

I am currently having a short UK holiday to see my family. Last Sunday saw me in London for my first visit of the year. I arranged to meet artist Cathy Read and for us both to attend Dibujo London's theatrical life drawing in the Barbican Centre's conservatory. Cathy & I have been in contact for several years through social media. It was lovely to finally meet face-toface and to draw together.
We started off with various warm-up drawing exercises followed by the story interspersed with poses (averaging about 10/15 mins each). I'm fairly pleased with the drawings I made, especially the direct watercolour sketches but unfortunately due to the non-existent broadbandwidth I cannot upload any of the images... nor my photos from the day. So here are the photos taken by one of the organisers Karina Ellen. 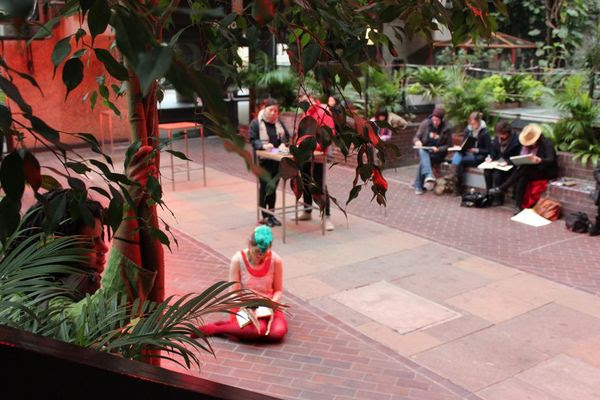 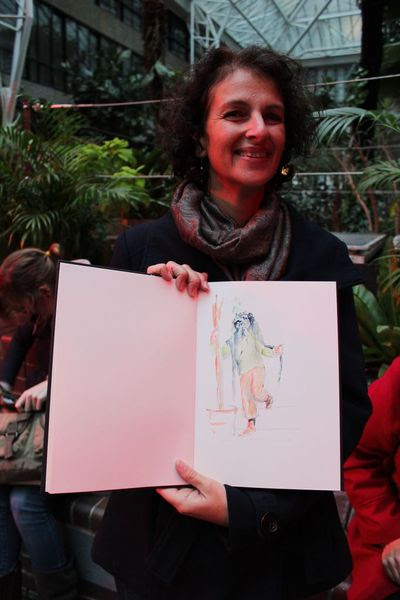 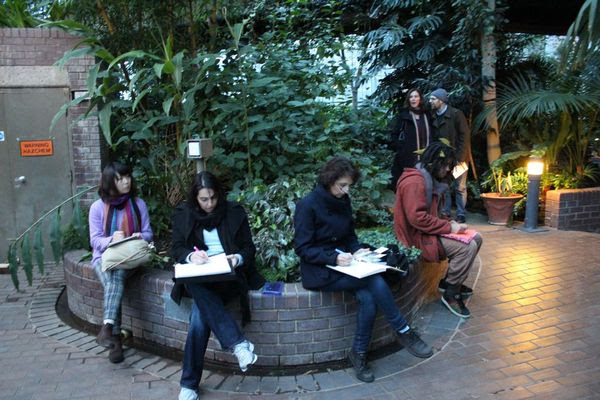 Please check out Cathy's paintings on her site cathyreadart.com, she's just started one inspired by our day out.

It you are interested in future events, Dibujo London can be found at meetup.com/Dibujo-London-Free-theatrical-life-drawing.

****
Edit: If you go to www.suepownallartist.co.uk/1/post/2013/01/jungle-scenes-aka-theatrical-life-drawing I have managed to upload some of my drawings there.
Posted by Unknown at 17:40

One thing I like to do when I visit my parents is to go to the Monday life drawing class, which has been running for years. I first went in December 2009, I attend several times in 2010, but last attended a class in September 2011. Knowing I was going today, on Saturday I decided to draw with charcoal, not something I've done in a very long time, so bought some ready for today's class. I was slightly nervous having not taken a class in so long and because of my choice of medium. Consequently, I did the three 5 minute warm-up sketches using a Conté sketching pencil and then happily used the charcoal for the longer poses. Usually I like the precision of pen and pencil and was surprised how much I enjoyed experimenting with the roughness of charcoal. By the way: Despite the photos here I didn't use tinted paper, but white and so the contrasts are greater.
During the 3 hour class, I completed 12 drawings of which the two here are my favourite. I feel it was a very successful morning and I hope to go again before I return to Oman. What do you think?
Posted by Unknown at 19:55