Just over a week ago, I was fortunate enough to be one of eight London Urbansketchers invited to draw at the Silvertown redevelopment site. I didn't realise there were still areas of London Docklands, which were not all sparkly and new. However, Silvertown is a huge wasteland, with remnants of the recent London Olympics, the huge Millennium Mill (previous millennium not this one), a grade 2 listed grain silo, lots of rubble, street art, and wildlife.
You can read about the mills redevelopment here on the BBC.

We were not allowed into the mill as there is currently a massive operation to remove asbestos, but we decked out in hi-vis vests and allowed to spread out throughout the site.
With a Payne's Grey sky and a bitterly cold wind, I wandered around to find a place to start. The mill itself was too daunting for a first sketch, so instead I ended up sat up a grassy bank, part of the old Olympic London Pleasure Gardens, to sketch the silo. With it's predominantly white facade, I started with the Payne's Grey, with a touch of indigo, sky to outline its bulk.

The wind was so cold, despite my layers of fleece, I seriously considered leaving, but opportunities like this are rare, so I continued until it was time for lunch, where we all huddled in a patch of sun behind a corrugated fence for shelter.

With patches of sunshine, it was time to tackle the mill... I was drawn (excuse the pun) to the street art and decided to try and capture a snippet of that along with the large painted advert on one face of the mill.

I started loosely in pencil, to try not to get to caught up in details, then added watercolour. I'm not sure how successful it was. What do you think? 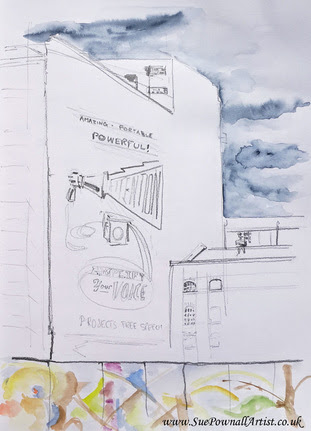 Finally, I wanted to capture a little of the current work, sketching the scaffolding and sign, but I was cold and not concentrating by that point, and so it remains hidden in my sketchbook.

Urbansketchers and photographers have been invited to record the redevelopment of the site as it progresses over the years, which is why we were there, and I hope I am one of the ones who gets to go back again. Finally, a big thank you to James Hobbs who organised the day. Check out his report and amazing Silvertown sketches here: Silvertown's Dereliction.
Posted by Unknown at 14:00