Painting in the Vale de Viñales. Part I

After Havana I travelled west to Vale de Viñales. After settling into my B&B (Casa El Relojero - Elio's which I'd thoroughly recommend) I went for a walk around the small town and when I saw these houses (above) I settled down at a bus stop, for shade, to draw them. It took just over an hour to paint by which time the heavens had opened for a tropical downpour and one of the neighbours had sat talking to me for about 10 minutes, both spoiling concentration, but both interesting in different ways.

The next day, I had arranged a horse trek into the valley, but having risen early I sat outside the front of the house and started to paint the neighbour's tractor. Elio's wife kindly bought me a cup of tea so I could continue. Unfortunately, I had to abandon the painting after the tea as the neighbour drove off in the tractor and didn't return until late afternoon. I tried to continue that evening, but a combination of the curious neighbourhood children - 8 of them, who surrounded me and the still hot sun, made me give up the painting again. 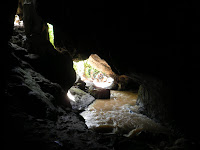 In between, I went on the most beautiful ride through the valley admiring the mountains and fields. Although it is not the tobacco season we went to a tobacco drying building and had the process explained to us (we were 3 on the trek) and were shown how to roll a cigar. The final stop of the ride was to a cave with an underground pool. Whilst waiting to be led underground we sat at the mouth of the cave and I sketched the rock formations. Yes I took my moleskin type sketchbook on a horse ride. What can I say? I am totally addicted to sketching. Once inside, apart from 2 small torches it was pitch black and we swam in the icy pool.

Day 3 in Viñales I took advantage of a hopon-hopoff bus and went up to a hotel with a stunning view of the valley. Despite having taken watercolour paper to Cuba, I used my sketchbook to paint the view. It's not a brilliant painting, but served the purpose of loosening me up.

An hour later, I was back on the bus and got taken to the other end of the valley where I painted again, but this time using pen as well as pure watercolour. I think this is a stronger painting. Neither looks quite as murky in real life as in the scans. After an hour at this site it was approaching mid-day and was very hot and humid so I caught the bus back to town for some lunch.
... to be continued.

btw I'm struggling to upload the Cuban photos, but I promise to post some soon starting with cars for Michael Bailey of Paint Bytes.
Posted by Unknown at 19:39