Taking advantage of being in UK for a little longer than anticipated, I took the opportunity to go to the opening of the brilliantly organised Trees For Life Charity Exhibition at Out of the Blue, Edinburgh. Details of the charity event can be read in my post Trees for life charity fundraiser. I would like to say again a big thank you to Trevor Jones, whose concept and hardwork brought it to fruition.


I chose to drive up as I was dogsitting, whilst my parents went on holiday, which meant I got to spend some time in beautiful woods, parks & on beaches as I exercised him. I drove up to Northumberland the first day and stopped about an hour from the border. That evening, we both visited the dog-friendly bar of the Newcastle Hotel where I sketched a few of the locals. The next morning, after a foggy walk on the moors along St Oswald's Way, we crossed into Scotland at Coldstream. We stopped for tea at Hirsel where I outlined the building opposite us, then added watercolour later.
Next, after a drive around Edinburgh, we visited the beach at Portobello, before heading to our hotel. I've mentioned before that Nelson always loves the sea and barks at the waves as they crash on the sand and I took the opportunity of a near empty beach to photograph him. More photos from the trip are on flickr.

That evening, I drove to the gallery for the opening of the exhibition, meeting the harried Trevor Jones briefly, before admiring all the donated work. I was delighted to see that Jeanette Jobson was hung on the adjacent board, as it was her contribution The Gate Keeper, which you can see here, that got me involved. You can still snap up some original pieces of art at the bargain price of £45 each, including  The President's Tree, either at the exhibition, which is open until the 13th November, or on the website here. Below are a few photos from the night. 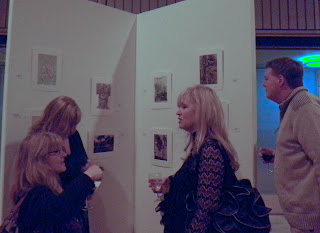 Don't forget to visit the charity's website www.treesforlife.org to see how they aim to restore the Caledonian Forest. Finally a quote from Trevor written last Saturday:

Let's get the remaining pictures sold  and push that total higher!
Posted by Unknown at 12:59