After arranging to raise funds for Japan's Tsunami relief last year, I decided to do something annually choosing a different charity each time. So this year, I organised Sketch Muscat in order to raise funds for Oman's National Association of Cancer Awareness. I chose a cancer charity as I have a friend who is going through treatment for breast cancer and it is partially due to her awareness and quick action (& good medical treatment) that she has recently received an all-clear. 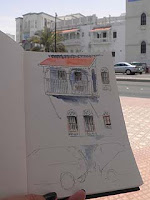 Sketch Muscat took place on Thursday, a week before the 35th Worldwide SketchCrawl as I have to go to a work conference then, but was based on the SketchCrawl concept. You can read more about SketchCrawl here. The meeting point was the Cornich Cafe next to Mutrah Souq and after drawing in and around the souq area, we then worked our way along the Corniche. Our final sketches were made near the Al Rasood Al-Azam mosque. It is something I have always wanted to draw, but after an unsuccessful morning (drawing-wise) I chose to draw the old French merchant building next to it. I will return another day to attempt it.


After starting this post with my last sketch, here are the others.
First a 5 minute sketch whilst waiting for hte Cornich Cafe to open, drawn from the stairs.


Then I drew the view from the table. My perspective and scale was diabolical, so I added strong watercolours in an attempt to disguise it.
Feeling disheartened with my beloved pen, I switched to pencil for this portrait of Ibrahim working on his first sketch.
Next, I drew inside the souq. Aziz, one of the sketchcrawling photographers (3 joined us at various times) took some photos, mainly of me sketching. I think I'll add colour to this sketch one day, although I'm concerned the shoe salesman may fall over backwards.

As we left the souq, our two youngest sketchers joined us, brought by their father of course, who is the photographer Ahmed S Al-Harthy.  Here is his website.
Finally, four of us posed with our sketchbooks before heading out of the heat and treating ourselves to a well-deserved juice. Thank you everyone who turned up and to those who contributed too.

Finally, this was in the Omani press yesterday saying I was the organiser, a member of OSFA, and other stuff. 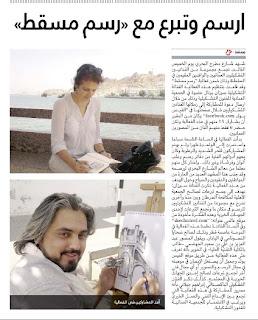 I was interviewed for the Times of Oman too, so hope to see that tomorrow.
Posted by Unknown at 11:22