Want to come up and see my etchings?

Back in the dim and distant past whilst at college, I had the opportunity to do some etching. This is what I did:
top basic etching, etchings plus watercolour
below aquatint plate printed in black and red. Final image combined plates. 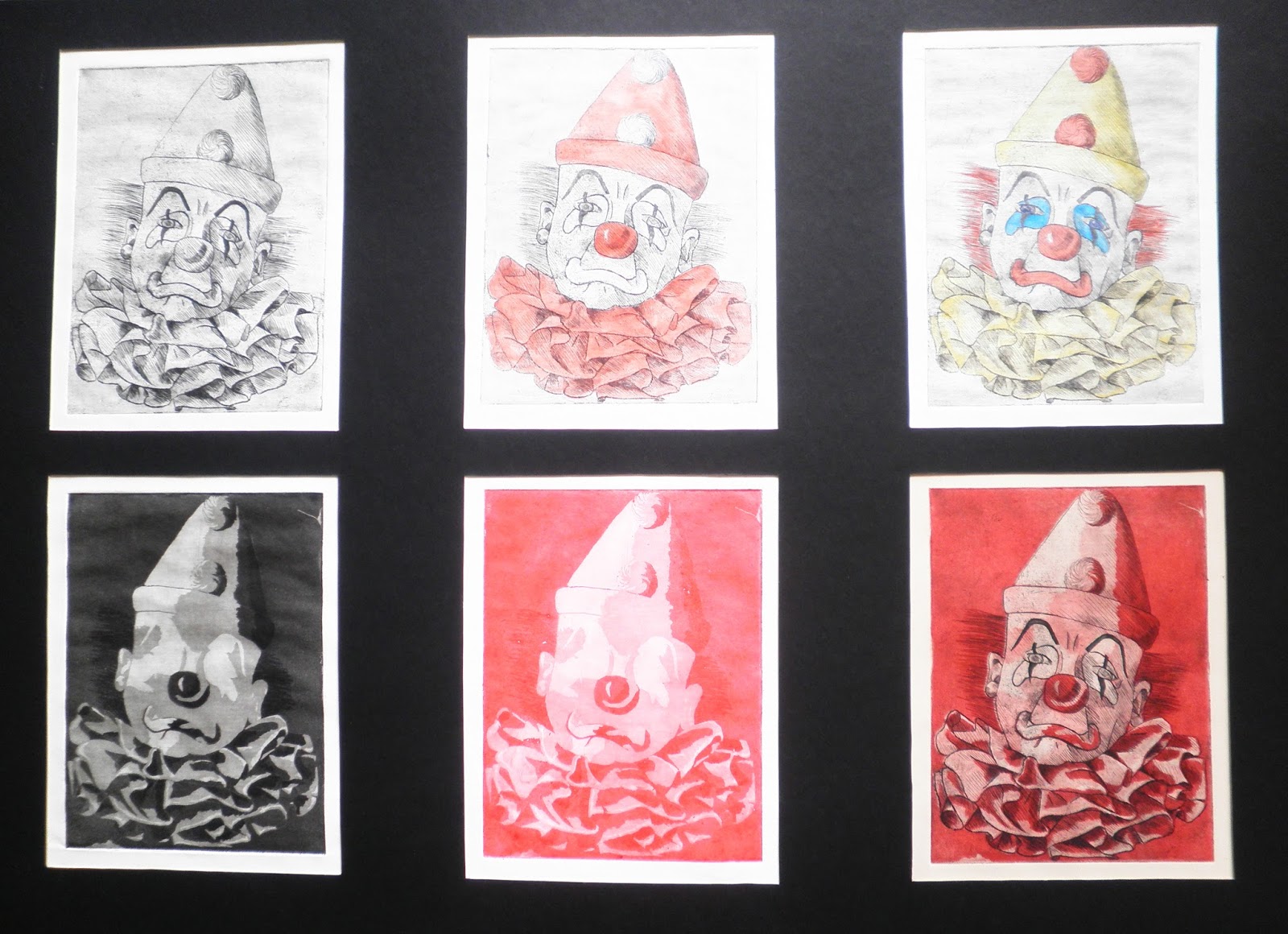 When I had my exhibition in December 2013, it was suggested that I should etch, but  I stored the idea until recently when I found a 1-on-1 workshop at Cuckoo Farm Studios with artist & etcher David Stone.
On a snowy morning, and starting with a 10x10cm ish piece of metal, I was shown how to apply a soft ground prior to copying a picture of oak leaves. After putting it in acid bath (8:1 solution) I then cleaned the plate off and... found that I hadn't pressed hard enough and there were very few lines etched. Take 2, soft ground prep by me, drawing (this time with a dead biro and a traditional pencil as opposed to the technical pencil I'd first used), acid, clean and...  there were lines. Yay!
Then, placing the plate carefully on tissue paper on the press, pre-soaked paper went next, more tissue, then the 3 blankets. After, winding it all through the press, it was a nervous moment to unveil my first print. Nothing stunning, but as this was a workshop it's about learning the process not the results.
Then it was on to plate 2, to learn and use hard ground. This time I drew lines with an etching needle to make a print of trees. It was funny but I didn't spot the mistake until it was printed. David told me how I could correct the plate, but I chose not to. Both reference photos used were from recent dog walks and they had grabbed my attention as "could draw that" subjects.
After cleaning the plates (white spirit to remove ink), it was time to explore aquatint, which I had no recollection of doing at college until I saw the photo.
Aquatint is a powdered acid resistant material that was applied over the whole plate. The clean dry plate was put in the box (left) wearing a mask and gloves, then placed on the rack (right) and heated with a scary gas torch from underneath. Once cool, which took moments as I watched the falling snow through the window, I stopped out areas with straw-hat varnish that I didn't want effected. Then it was into the acid bath. Due to the temperature, the grey/time scale based on 24°c was redundant, and David made an educated guess. I built up several tones through stopping out more areas and dipping the plate in acid. The varnish and remaining aquatint were then removed from the plate (white spirit and meths), before it was back to the press... and I was very impressed with the improvement to my first plate (above). So I repeated the aquatint process with the other plate, but reducing the time in the acid bath to just 15 seconds per tone. Here is the result: I found the whole workshop inspiring and will soon do an induction in order to use the print facilities reguarly.

Have you tried etching? Or been inspired by a workshop? You are welcome to leave a link to your work in the comments below.

*NOTE: the expression is believed to be an Edwardian euphanism to encourage physical intimacy.
Posted by Unknown at 12:21