Having attended last year's symposium, I was not as nervous before my first workshop, but still at little bit. It was with Paul Heaston, whose work I really admire. Paul had almost finished his demo when the heavens opened. We took over a nearby café/restaurant and got out our new sketchbooks given by the Brazilian sponsor: casa do artista

The workshop was on drawing wide-angle perspectives, and whilst I understood Paul's great handouts and explanations, unlike normal perspective I couldn't "see" it. Hence, among many errors my pad and and feet are too small in this first attempt.
With a break in the rain, I went outside for my 2nd drawing, and whilst I had to take cover twice from more showers, I am pleased with the result. (Top). I really enjoyed this workshop and (with cheat sheets in hand) shall try this method again.

After a too short lunch break, it was on to Liz Steel's workshop "Feeling the edges – a tactile approach to sketching architecture". Despite the freezing cold, the wind was icy cold, and being cut off by an amazing full-moon tide (I believe they are called King tides), which flood the streets of Paraty. It was very interesting and fun. We did lots of mark making and an exercise which involved careful measurement of proportions, before we could then take a more tactile approach.
In the brief Liz said "Trusting your own personal response to a building is far more important when sketching architecture than achieving absolutely accurate proportions or perfect perspective", but I seem to have lost the point when working on my final drawing. I'll blame the cold.
Looking at the sketch later in the Pousada, I added the sky, then colour in an attempt to get something nearer the aim of the workshop - should have left it alone, I think. Oh well, it's all about learning. 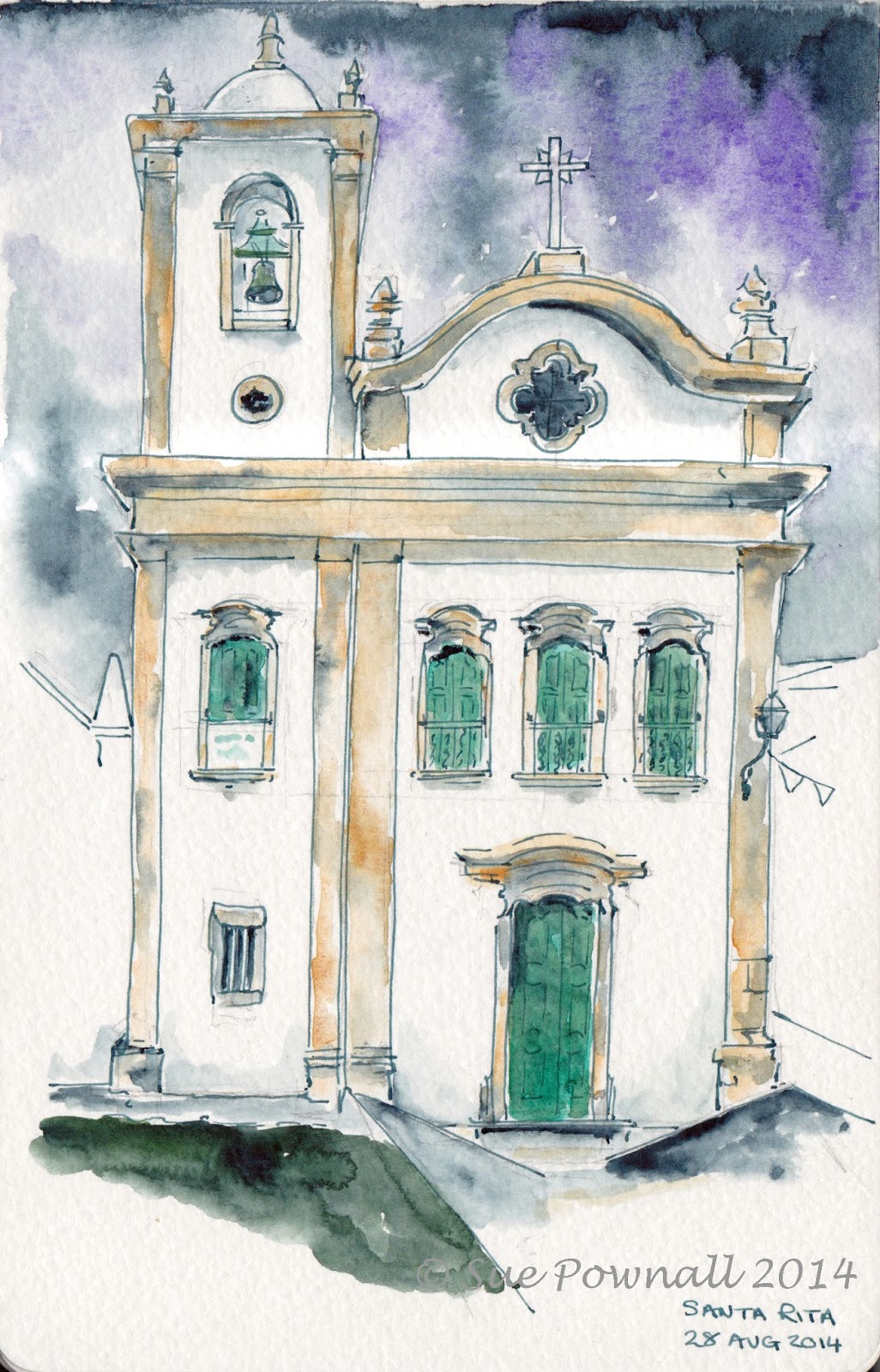 Heading back for more clothes prior to dinner, I heard drumming and went to investigate. There was a drum class in a building and I stood in the doorway and sketched - my own personal response :) I am starting to doubt using the urban sketcher title, as I do tend to draw people and objects without their setting. I guess that's something to think about as I always struggle with the situational part of people sketching. 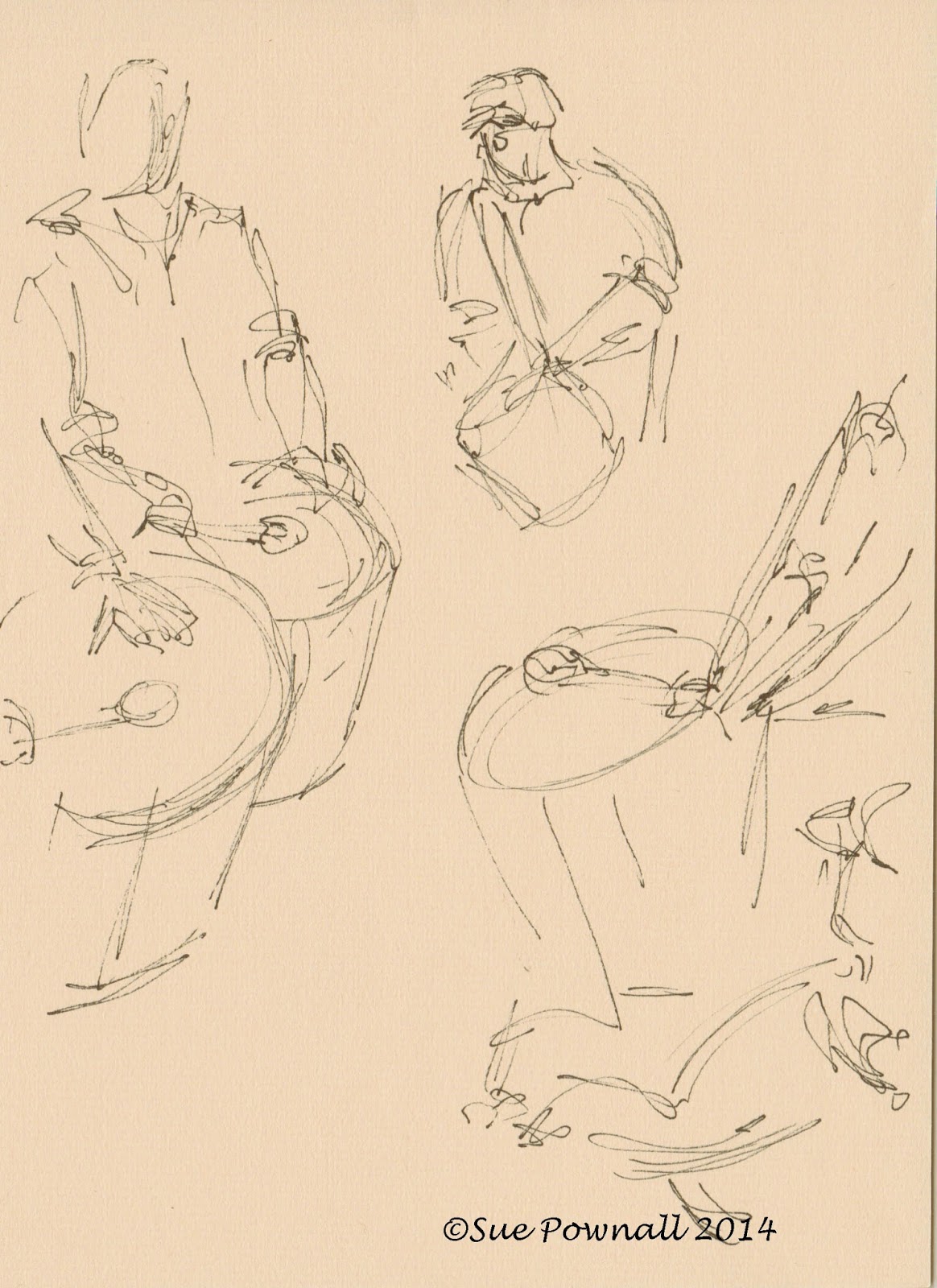 By the time the drumming stopped, it was time to meet the others for dinner, but couldn't find them. Luckily I ran into Omar and joined him and Norberto at Quintal Verde. I started the sketch below, but a group of people came and sat blocking my view. Later, we were joined by Rita, which is one benefit of a smaller location in that you could normally find someone to eat or drink with. 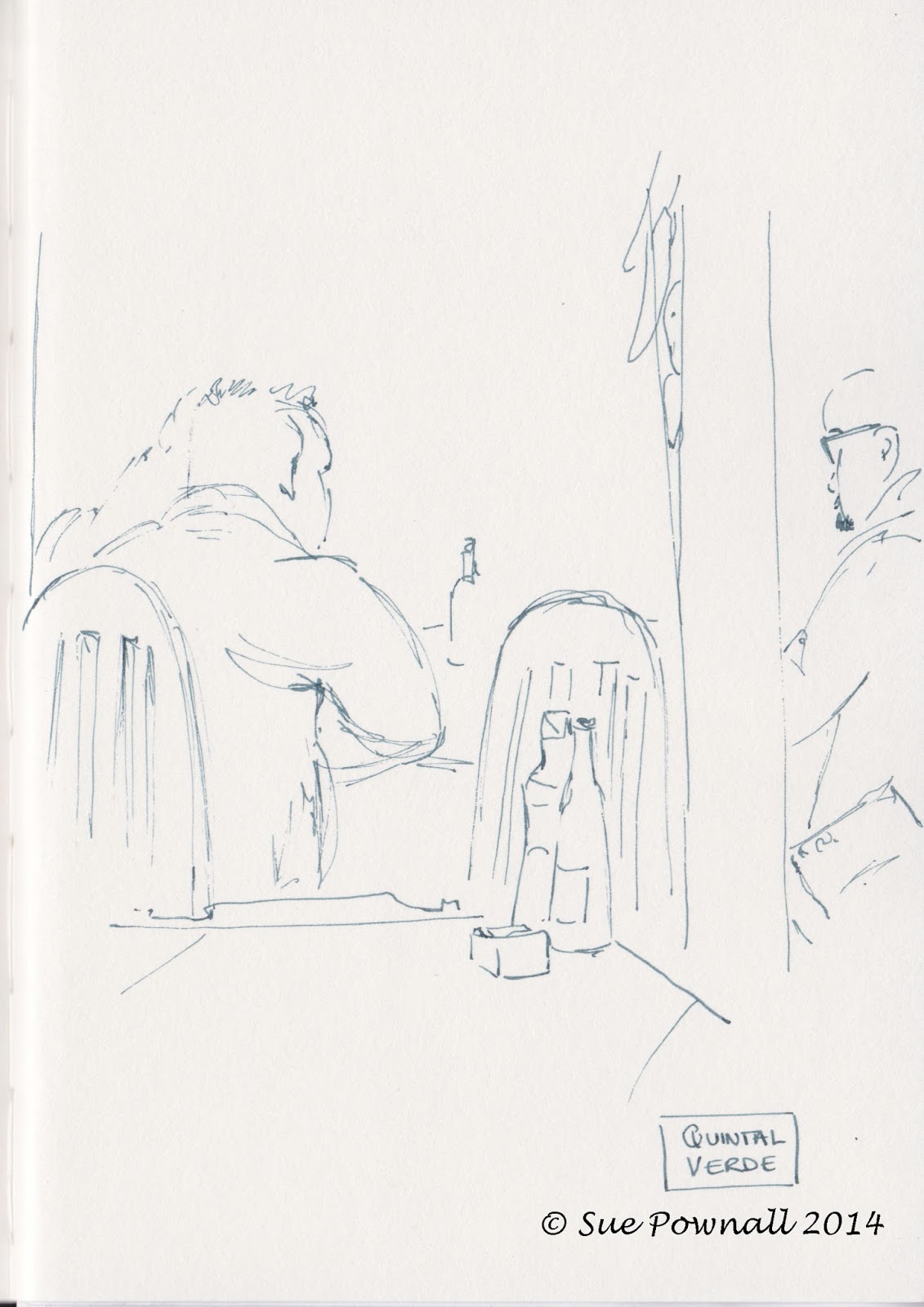 So that was all from the Thursday. Friday was another full day, which I will leave to my next post.

Please leave your comments below, as I love to hear your thoughts.
Posted by Unknown at 11:33