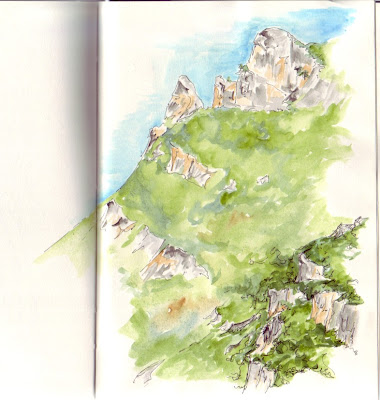 I have just returned from 2 weeks in southern Italy and judging by the number of watercolours, it appears I wanted some colour in my life. Top is the morning view from my lounge: the light on the greenery was just perfect and cried out to be painted.
Hopefully, the roof over the future study/studio/second bedroom is being replaced next month, so I did a few sketches of the bones that currently abode there.

Then back to colour with a watercolour of the church on the hill, which overlooks the road into the village, shortly before a storm. The pre-drawing was hopeless, badly out of scale and the perspective is wrong - I could only see a small part of the roof, and I only just had enough paper on the left. Even so I like the finished result.
I'm not a beach lover, and alone it is tedium itself, so I sat under the brolly and sketched the centro storico of Scalea stretching up behind the beach.
More colour, painted whilst sat on the kitchen steps of the evening light hitting the rooftops. 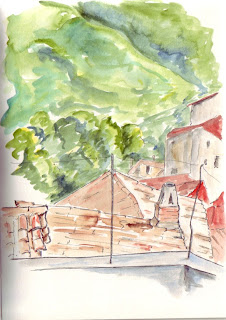 On my way to Naples airport in December I broke the journey in Roman Pompeii, this time I stopped at the fabulous Ancient Greek site of Paestum. Where, with limited time, and feeling very self-conscious, I painted the temple of Ceres or Athena (500BC). 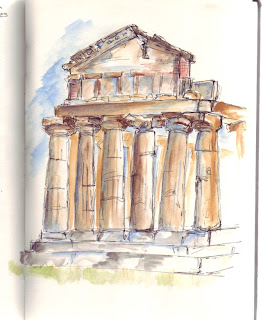 A bit of history:


Paestum, or Poseidonia as it was originally known, was founded by Greeks from Sybaris in the 6th century BC. The Greeks built three great temples - the first dedicated to Hera and two more of uncertain dedications - between about 550 and 450 BC.
The city was colonized by the Romans in 273 BC, who Latinised its name to Paestum Christians and added the usual Roman infrastructure of roads, forum and theatres. moved in around the 5th century AD, converting at least one temple into a church and building a new church nearby.
By the 9th century AD, the land had become swampy and a combination of malaria and Saracen raids had decimated the population. The city and its great temples were abandoned and gradually overtaken by the forest, where it remained hidden until its discovery in the 18th century during the building of a road. Source: Sacred Destinations

That brings me up to date and back in England again.
Posted by Unknown at 13:58