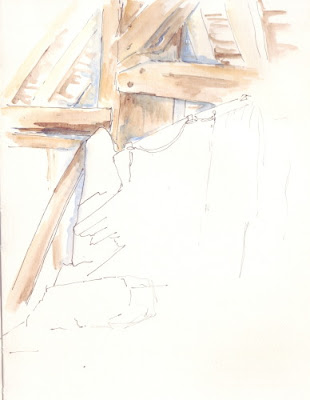 On a stormy evening, I went to a brilliant performance of the Tempest held, luckily, inside at Cressing Temple Barns. A benefit of going alone was that I got a seat in the front row alongside the reserved guest seats, and so I sketched and painted the barn behind the scenery before the performance started. As is normal with a Shakespeare performance I  got a little confused in a few places, but the terrific acting made up for it. It was performed by the professional touring group: The Festival Players Theatre Company. The beautiful setting added to the fantastic performance, so did the musical elements. 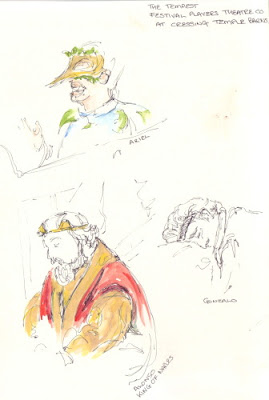 I sketched a few of the actors in the first half (adding the colour later), but found the performance too engaging to do much and put my sketchbook away in the interval. I may add a figure into the stage setting later, as that is what I planned when I drew it.