This was a very interesting week which saw me experimenting with some of the ideas during my early morning dog walks.

Unit 2 was Exploring Art Vocabulary and this is something I can see my adult learners engaging with, maybe as homework prior to a drawing class. The learners have a problem with shades and tones, so I chose white as a means to focus on that rather than distracting colours... Of course there is not just one white in nature, as Dulux reminds us everytime we go to a home improvement store. I used my phone to snap elements as we walked, liking the signs of spring, such as downy feathers on the grass, but also the mix of nature and human influence on the landscape. Once home, I made a collage of the images to give a visual description of the walk, but also showing the white variations. 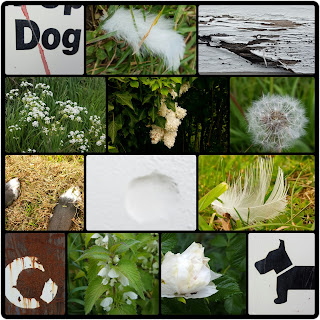 Below is an image that didn't make the collage, but I do like the effect caused by all the dandelion clocks. 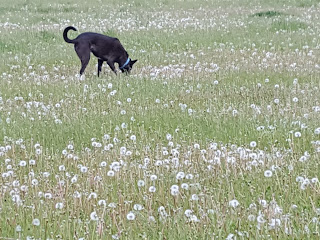 Also, I have been collecting images using other colours, like these purple flowers in the churchyard, as I found this exercise inspiring, so hopefully my learners would too. 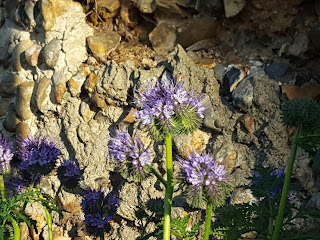 Unit 4 was I am the Pencil and posed the thought:


We often pick up tools and use them to make marks on surfaces - but what if we ourselves were the tool and surface was the ground?


The idea was to use a route app on a phone or tablet that "allows the learner to draw shapes and patterns using themselves as drawing tool. It leaves no mark on the environment and exists only in the device in which it is made and can be shared from." I downloaded Map My Walk and took a short experimental walk to see how far you need to deviate to create a new line - a pace or two sideways was my conclusion after drawing the letter "S". 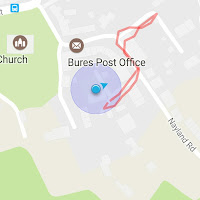 Next morning, on another dogwalk, I mapped our short early morning walk, and with guidance, used a hybrid map to show the route (below). 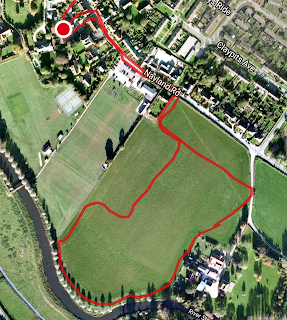 I haven't had the chance to explore this fully, as the next stage would be to manipulate the app pausing its recording to create different patterns rather than a continuous line. I liked the concept of this art only existing on a device, especially the way it's been used in the collaborative project Flock Together by artists Debbie Locke and Sara Dudman, and may be able to incorporate something like this in my own practice.

Altogether a very interesting week.
Posted by Unknown at 08:57