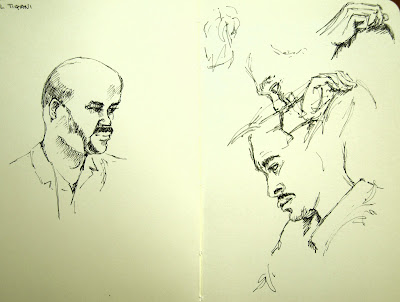 Doing their weekly exam on Monday, I first drew El Tigani with his very upright posture, when I noticed Ahmed was struggling with the test. Moving frequently, Ahmed's most unusual position was wrapping his right arm across his face and onto his left shoulder (he's left handed) and I tried to capture this every time he moved into that position. (portrait sketch top right) He has beautiful hands, which were full of tension, but they moved so frequently I was unable to capture them. I think the bottom portrait has captured his sadness at the difficulty of the paper.

With the second class, I sketched the view out of the window, but was unable to finish it within the time, so I intend to either finish it at break tomorrow or the day after and post it then.
Posted by Unknown at 16:22