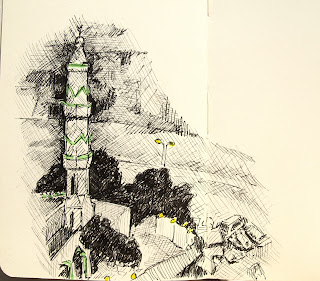 In the early hours of Sunday, I awoke with the worst migraine imaginable. At 7am, I crawled into the shower when my head-splitting alarm went off after a sleepless night. With the room spinning and the light causing intense nausea I called in sick and returned to bed. Generally, I am happy with my own company, but feeling sick, alone, and with Muslim restrictions meaning friends couldn't visit me in my rooms, not even to drop off Panadol, resulted in some very childish tears, which didn't help.
A day later, having gone to work to be told I looked dreadful (I knew that), that evening whilst still feeling the after effects of the migraine I sketched my local mosque. I started at sunset with the Magrib call for prayer and it swiftly got dark. I love the fluorescent green tubes around the minaret and used a highlighter pen to try to get them to stand out, as they do in the night sky. Being pleased with the results, and loving the sound that came from the mosque, I felt a smile return. 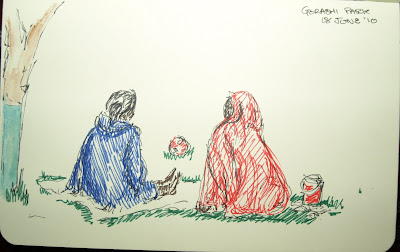 I forgot to post the sketch above from Friday evening. Whilst waiting for a friend, I did this quick sketch of some Sudanese women watching their children playing. I had my coloured pens on me as I had intended to sketch the England match. The colour on the tree was added later, as it is such a distinctive colour here I wanted to record it accurately.
Posted by Unknown at 16:09