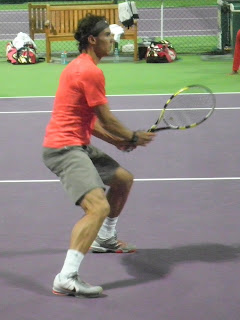 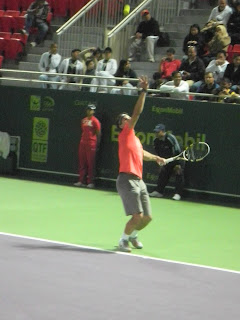 Yesterday, I went to the ATP - Qatar Exxonmobil Open 2011, to see Rafael Nadal play in the quarter finals. I did this sketch in between matches. I don't think the guy in front realised his T-shirt was the same colour as the seats. The sketch took about 15/20 minutes, but then I added colour at home.

Nadal was fantastic, as always. I saw his quarter final against Gulbis, which was closer than it should have been. Then I went to his double match on court 1 - like an outer court at Wimbledon. I sat in the front row, so close you could almost touch him, could really see his awesome playing skills that make him the World's No. 1.

His partner Marc Lopez and his opponents, Gabashvili and Schreiber, all played well, but Nadal OUTSTANDING!


btw I also saw Federer play earlier in the evening.


btw2. By 9pm the temperature had dropped to 19c and us softies used to the winter warmth then shivered until 11.15 as the doubles was played the temp dropped a couple more degrees.