I feel a bit like the American Where's Wally as my new photographer friends keep taking my photo as I sketch at the Festival. It's nice as some of them are being shared with me on my facebook page. I posted the Where's Wally (Sue)? pic by Nasser on the last post and I thought I'd add more to this post.
I love the one above taken by Waleed, which was taken on Sunday. I don't normally paint standing up, but had sketched the guys from Al Musna and was enjoyng their clapping, singing and drumming, so much that I wanted to add colour to capture the feeling. They seemed to enjoy my attention too as between every song they gathered around to see what I had done and tried to guess who was who in the drawings.
I'm particullary pleased with the sketch below. Do you remember that awful 80s song where you sat in a line on the floor and did a strange rowing action??? This was like that without the dreadful music, but with drums and chants. 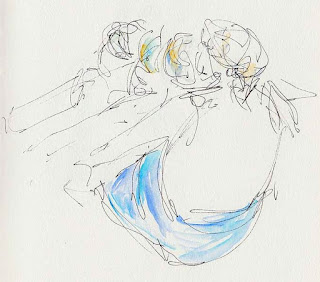 My 3rd sketch of the Al Musna troup was of Yosef the drummer, but he moved so much as he drummed vigourously it's not a good likeness, and I was sketching directly in watercolour.
Below is the first Where's Wally photo taken, that I know of, whilst I was sketching the picture in festival post VIII on the 15th.
The rhythms and people as well as the perfect light really spoke to my soul as I drew on Sunday and so my other 2 pictures were in colour too. There were groups of beautiful ladies sat so I went over to capture them. I sarted the details of the lady in red, then they left. oh well. 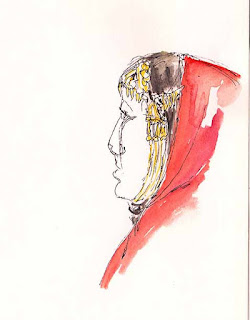 In the last sketch I was trying to capture the ladies as they stood chatting, waiting to perform. The one in the middle has an orange cloth folded on her head, I don't know why, custom? 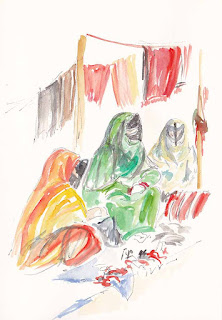 I had a less successful sketching session yesterday, I think because I was preoccupied having unsuccessfully scanned my latest drawing and now have the search for somewhere else to scan finished pieces. I painted the ladies above soon after I arrived. I had previously tried to sketch them, but had been thwarted by the crowds. Luckily last night was quieter. I'm not keen on the angle of the Where's Wally shot, but it shows the the ladies in the background well. I love the old men, seen below, in their dark dishdashas and musars. The old guns seemed very heavy, and I tried to sketch them casually slung over the men's shoulders. Unfortunately, the men were moving a lot, and I wasn't as loose as on Sunday. 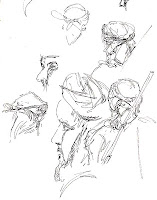 Sorry about the length of this post. Only 2 more nights until the festival is over for another year.
Posted by Unknown at 08:56