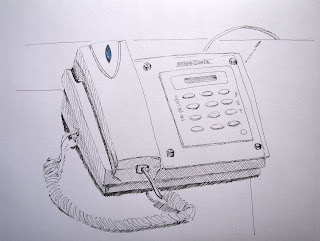 I drew the hotel phone last night. I intended it to be just in line, but did the shadow and then just continued. Every time I use the phone it amazes that someone would bling a utilitarian object like this by adding a shiny blue bead.

My first courses, here in Sudan, have just ended and among the farewell gifts is a set of Staedtler coloured pens - think I shall go out later and test them out. Look out for some coloured pics later.
Posted by Unknown at 11:51