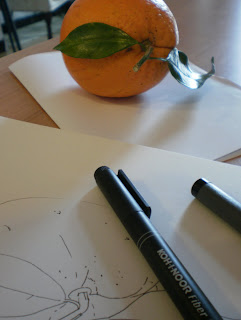 What a deadly combination... drawing because you feel you should, after all you promised yourself, and trying out a new pen, which you find to be scratchy and you don't like. That was me earlier.

I did find something I wanted to draw, just not then. In January I painted carrots, after looking in the market for some with their tops still on, so it was a nice surprise to take an orange out of the fridge and discover it had its beautiful glossy leaves attached. A perfect subject, shame I just didn't want to do it.

Attempt one "blah!". It looks like I have tried so hard to draw well, so it is overdrawn, but it was not taken far enough to rectify as I fought the compulsion to be lazy, and laziness won.


Update: After ignoring the earlier attempt for several hours, I thought I would try adding a colour wash to attempt 1  ha ha I forgot that I'd draw on proper ink paper... as it says on the cover "Very resistant. Extra smooth surface". The wash just sat looking murky and pathetic. It is now in the paper recycling bin.
Posted by Unknown at 15:20